Nepal Holiday Organiser all tours, led by well trained expert, cultural guides offering you wide knowledge of the area in our interesting tour in the comfort of spacious coach – cars or four wheel drives, as per the group size and travel distance.

The buildings here are of greatest achievements built by Malla dynasty, which resulted great rivalry between the three palaces of Kathmandu, Patan, and Bhaktapur.

The Valley was divided among the children of Yaksya Malla, for visitors today, and for the Nepalese, it was unanticipated that later the off-springs, began an artistic warfare trying to outdo each other in impressive constructions. Kings copied everything their neighbors built in an even grand style.

Visit around the Square with a round temple of pagoda architectural style, the temple of Goddess Taleju (legend has it that She played dice with King Jaya Prakash Malla), and an image of Shiva and Parbati sitting together among the many monuments.

The Square is lively with colorful life with street vendors selling vegetables, curios, flutes, and other handi0crafts around Kastamandap rest house. This rest house is said to have been constructed from the wood of a single tree and the name Kathmandu was derived from the name Kastmandap.

Nearby are great drums which were beaten to announce royal decree. All woodcarvings, statues, and architecture in this area are remarkably fine, and Kathmandu Durbar Square is among the most important sights for travelers to observe.

The complex also houses the Tribhuvan Museum that carries the mementoes of different Shah Kings and its dynasty from early 17th Century to present.

Akash Bhairab Temple:
Also known as Blue Bhairab, a 3 tier temple near the main market of Indra Chowk, the divine image of Akash Bhairab is displayed outside for a week-long period, during great festival of Indra Jatra. The celebration of Indra Jatra honors Indra- the King of Heaven and the God of Rain.

Hanuman Dhoka:
An ancestral historic seat of past royalty, mainly belonging to Malla dynasty, Durbar Square, itself an old Royal Palace Complex dedicated to Malla royal sovereigns, today listed as World Heritage Site. The age-old temples and palaces symbolize religious and cultural life-style of the early day people. The interesting sites includes Taleju Temple built by late King Mahindra Malla in 1549 A.D., a gigantic stone figure exposing fearful appearance of Black Bhairab which the Hindus regard as God of Destruction, the tall stone pillar on the pedestal-top sits late King Pratap Malla with his four children at the four small corners, the colossal image of the White Bhairab the lattice, removed for a week during Kumari Yatra festival, the 9th storeyed Basantapur Palace (literally meaning the spring season palace), the Great Bell and the Great Drums. The main golden-gate is guarded by a Monkey-God known as Hanuman.

He is the king of the Monkeys and faithful devotee of Lord Ram-the Hero of the Epic “Ramayan.” Being guarded by a sole protector, the gate itself has come to be known as Hanuman Gate. With a commercial umbrella suspended above his head and wrapped in a scarlet cloak, sits on a stone piller respected by hundreds of Hindus.

Temple of Kumari:
Temple of Kumari with holy quadrangle houses a Buddhist Stupa in the center, this place a residential quarter of Chaste Virgin ‘Living Goddess’ called KUMARI. The traditional building has profusely carved wooden balconies and window screens.

The non-Buddhist and non-Hindu visitors may enter the courtyard called ‘bahal’ but not allowed beyond upstairs. The KUMARI welcomes and greets visitors from the middle window of the balcony particularly saved for her only and taking photos is strictly prohibited.

Kastha Mandap:
Situated near the Temple of Kumari, a unique type of wooden temple also named Maru Satal.
It was built in 1596 A.D. by King Laxmi Narsingh Malla. The story mentions timber used for its relevant building was sawed out of a single tree.

It is also believed that the capital of Kathmandu derived its name from this very ‘Kastha Mandap as Kathmandu’ Today it houses a Hindu God Gorakh-Nath.

Pashupatinath Temple:
Located east some 5 k.m. from the main city, a holy Hindu Temple of pagoda style with gilt roof and richly carved silver doors, the temple dedicated to Lord Shiva close to holy Bagmati River.
One of the most sacred sites of entire Hindu world, Pashupatinath Temple is the nerve center of pilgrimage for millions of Hindu on auspicious day of Shivaratri.

The area with great temple known as Debpatan, where only Hindus are permitted to enter the main courtyard of the temple, non Hindu tourists can observe the temple from the east side of the Bagmati River.

It’s rests on a series of three terraces looking from bird’s eye view it’s a relevant shape of a lotus flower which indeed remains a very holy object for all world-wide Buddhists devout.
The Stupa known as chortens in native Tibetan Buddhism language surrounded by a circular market popularly known as ‘Little Tibet’, The Stupa with four pairs of Buddha’s eyes giving a stunning flash around four cardinal directions, as a diligent watch over the people and their commitments. The Stupa embraces authentic philosophy of Mahayana faith of Buddhism which is known as Lamaism in Nepal, Sikkim, Ladakh, Bhutan and Tibet.

Swayambhunath (Monkey Temple):
A mystical and ancient monument land mark of Kathmandu, believed to be more than 25 centuries old stands as one of the world’s oldest Buddhist Stupa / Chaitya.

The Great Stupa of Swayambhunath, a wonder that was Nepal and the glory that was Nepal.
It is listed as World Heritage for Site, serving as the nerve center of faithful worship for all Bajrayan devout philosophy, particular honoring Lord Adi Buddha.

It is dedicated to the self – originating flame God, the Stupa forms as most important structure, well composed of a solid hemisphere of terra – cotta bricks and soil supporting a cornice of copper and gilt with paints on four-sided of the spiral where the all seeing eyes of Lord Buddha, keeps an eternal watch over the valley distinguishing between vice and virtue.

It is 6 k.m. West of Kathmandu cities, across Bishnumati River, perched on top of a hillock it is about 500 feet above the level of the Valley. The whole hill is a mosaic of small Chaitya and pagoda temples treasured with great five Mahayana (Lamaism) and one Hinayana (Therbadista).

Behind this hill located another important Buddhist shrine; called Manjushree a Chinese Buddha known as God of Knowledge.

Kimdol Monastery:
Situated within Kathmandu City near Swayambhunath Hill, which is another famous Buddhist monastery Kimdol. It is a small town itself full of Buddhist citizens.

Kimdol placed on top of a hillock where Buddhist embraces two major aspects of Buddhism including Mahayana (Lamaism) and Hinayana (Therbadista).

This pleasant area with numerous stupas, Chaitya and chortens / Stupa scattered around. Prayer-flags with printed Tibetan characters and holy diagrams flutter with the breeze.
Kimdol area believed to be the location of Hinayana (Therbadista) form of Buddhism.
At present only nunnery with saffron robe is practiced here; monk-hood has eventually shifted elsewhere. From this scenic hill spectacular view of old Kathmandu (Kantipur), can be clearly seen.

Budhanilkantha / Narayanthan:
Located northern suburbs from the city at the end of the valley rim, beneath high green hills of Shivapuri, a delightful Hindu temple dedicated to Lord Vishnu or Narayani. It is also known as Narayanthan. Lord Vishnu lies on a bed of serpents amidst sacred pool it seems like floating on water the surrounding pond represents the sea.

The reclining statue believed to be built in 5th century A.D. The season of religious celebration takes place in end of October or early November after festival of Hindu Tihar (festival of lights). Although it is a renowned spot of worship, the reigning king of Nepal (May it be present-day or any Hindu monarch) may not visit this place for reasons particularly unknown.

A small replica of the monument has been built in Balaju water garden for the monarch.

On the drive observe old Newari culture as it was for hundreds of years around medieval town villages with flourishing agriculture and farming, on reaching Pharping visit the famous old Buddhist nunnery with monastery and caves, here in 6-7th century Guru Padmasambhava from India visited here on his way to Tibet stayed and meditated, a short distance from this spot visit Dakshinkali Temple a vicious looking goddesses, where pilgrims offers small animals like goats and chickens Saturday is full of worshipper situated in Chobar gorge where Bagmati River flows through.

Dakshinkali and Pharping area famous for pears and other dairy product as well certainly this will be great escape from the hustle bustle of city life for few hours.
Here perform the puja and religious rites with the help of local priests and return back to Kathmandu and free rest of the afternoon at leisure.

Sankhu:
Located north east of Kathmandu city, a peaceful small town with an old name Shankharpur according to ancient and classic Sanskrit language and present name known as Sakhu, served as exit point to Lhasa of Tibet in earlier days of Trans Himalayan Caravan Trade Route.

Marvel 4th century water spout which is artistically decorated statue, this places confirms that the Bajrayogini was an ancient religious site of Kathmandu Valley. It was renovated during the period of Pratap Malla, a famous king of Malla regime in Nepal.

A religious book of Newari Script with chronological development of Bajrayogini is kept in the library of Denmark.

The Bajrayogini is 2 Km North from Sankhu, it was very famous since Kirat period and named as Gun Bihar. Literally in Newari language Gun means Forests and Bihar means recreational place. Now it is called Gunbaha.

It’s a shame that so many trekkers stayed away from the Manaslu Trek after the April 2015 earthquake. There was a big lack of information about the safety of trails…
Read More .. 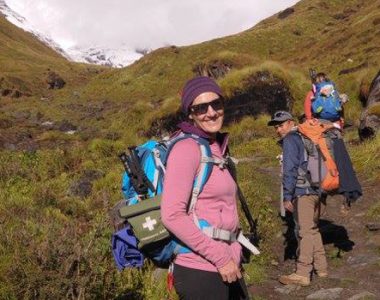 The classic style of trekking in Nepal is to camp in tents and employ Porters to carry your gears and Sherpas to set up camp, cook and serve meals. You…
Read More ..